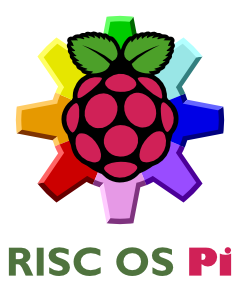 RISC OS is not a flavour of Linux. It’s not a type of Unix. It’s certainly got nothing to do with Windows! RISC OS is its own thing – a very specialised ARM-based operating system. So if you’ve not used it before, you will find it doesn’t behave quite the same way as anything else. We think it’s better!

Note: RC14 supports all Raspberry Pi models A, A+, B, B+ and Model 2 B. With the latest firmware, it also supports the Compute Module/IO Board.

It contains all the elements required to run RISC OS, including the firmware to initialise the Raspberry Pi as well as the HardDisc4 boot files, in an SD card image which can be written to a blank SD card using a tool such as Win32DiskImager.

Once written to the SD card all you have to do is turn on the Raspberry Pi and it will start up in RISC OS with a lot of preloaded software. The ROM image is RISC OS 5.21 (17-Feb-2015) and is held inside $.!Boot.Loader where you will see the other firmware files as well:

The RISC OS ROM image will be written to each time you shut down (by the SDCMOS module, this makes sure any ‘CMOS’ settings are kept up to date) hence updating the datestamp of the ‘RISCOS/IMG’ file.

These files appear to the Raspberry Pi as the only files in the FAT partition on the SD card as it starts up.

Within RISC OS you will see a complete hard disc of files which means that you can start right away: 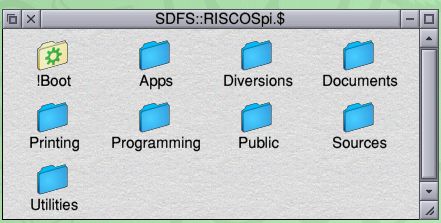 When it first starts up you will be shown the Welcome Guide which explains things such as how to download more RISC OS software using either the !Store or the !PackMan utility. Each of these shows you a list of RISC OS software, with a detailed explanation of what each bit of software does and lets you choose which items to download.