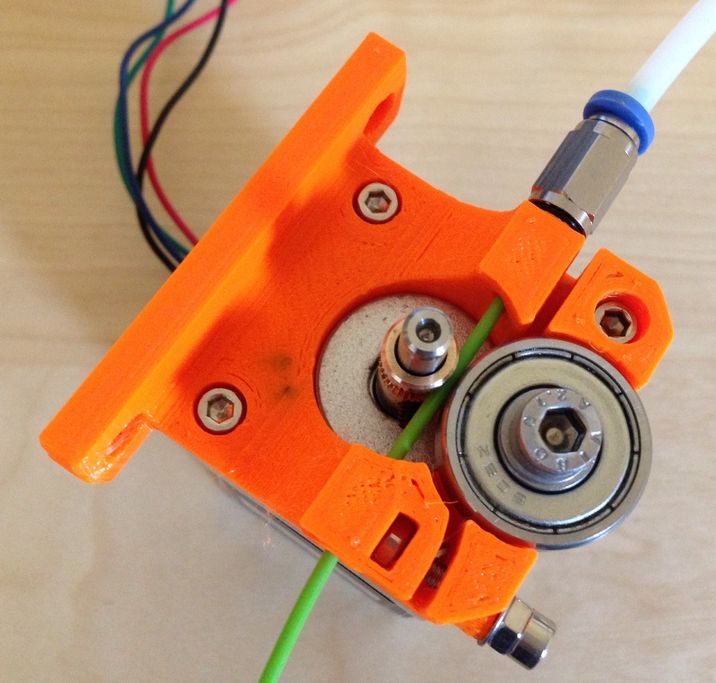 Thingiverse commentaar:
A compact direct drive bowden extruder for 1.75mm and a MK8 style hobbed pulley. The OpenScad is almost completely parametrizable, so it can be adjusted to fit other hobbed pulleys as well. The mounting plate can be removed from OpenScad easily.

I have used a 13x8mm, 5mm bore brass hobbed pulley, because it was easy to acquire here in Germany.

Note: I ordered a suitable compression spring later, so it’s not visible on all of the images.

UPDATE 2015-10-13: Designed alternative idler to solve breaking of bearing support
UPDATE 2015-03-17: Updated idler for better MK7 drive gear support
UPDATE 2014-11-13: Added push-fit bowden inlet option
UPDATE 2014-09-22: Fixed OpenScad file due to non-manifold vertexes between base and filament tunnel after inspection with MeshLab, exported STL
UPDATE 2014-06-01: Removed the work-in-progress flag after extensive testing and positive feedback from the community.
UPDATE 2014-04-27: Placed base and idler “printer ready” beneath each other, added compact_direct_drive_extruder.stl with base and idler combined
UPDATE 2014-04-07: Replaced tensioner hole with slot on idler, added funnel on bowden side of base for easier filament insertion