System Requirements
Runs on Microsoft Windows 8, 7, Vista, XP and 2000. Including both 32-bit and 64-bit versions.

Undelete files on your computer
We’ve all deleted files by mistake, or without realizing we’d want them at some future point. Photographs, documents, music files, even emails – we’ve all had regrets. With Recuva, you can get them back quickly, safely, and easily. This compact Windows program does the work for you, scanning your drives for the files you need, then recovering them in a flash.

Recuva works on any rewriteable media you have. Whether you need to recover priceless photographs from your digital camera’s memory card, files you backed up to an external hard drive, or the documents you carry around every day on your USB key, Recuva’s got you covered. For prosumer and pro photographers, Recuva supports the Nikon RAW and Canon RAW (.CRW) formats.

If you listen to music on an iPod, Recuva can recover files directly from the iPod’s drive. Even though you can’t access files on your iPod directly, Recuva can. You don’t have to worry about losing music from iTunes or your iPod any more.

Recovery from damaged or formatted disks
The dreaded hard drive crash. The file you forgot to backup before you reformatted a drive. The camera memory card with your holiday snaps that no longer works. Recuva can handle them too.

Windows (and other operating systems) uses a hidden index on hard drives, USB drives, and memory cards. Instead of having to search through the entire drive for a file you request, all it has to do is look it up in the index — a much faster process.

Unfortunately, if the index is damaged, Windows can no longer find your files, even if the files themselves haven’t been corrupted. That’s where Recuva comes in.

Unlike Windows, Recuva scans all parts of a drive, looking for the bits that make up your files. If a drive’s index has been damaged, chances are other parts of the drive may have been damaged too. Recuva will show you a list of files it has found on the drive, and give you an estimate of the likelihood of success of recovering them.

Similarly, when you format a drive (especially if you use the Quick Format option), Windows erases the hidden index but does not overwrite the existing files until you start saving new data to it. Recuva can still scan the drive’s contents to find your files. 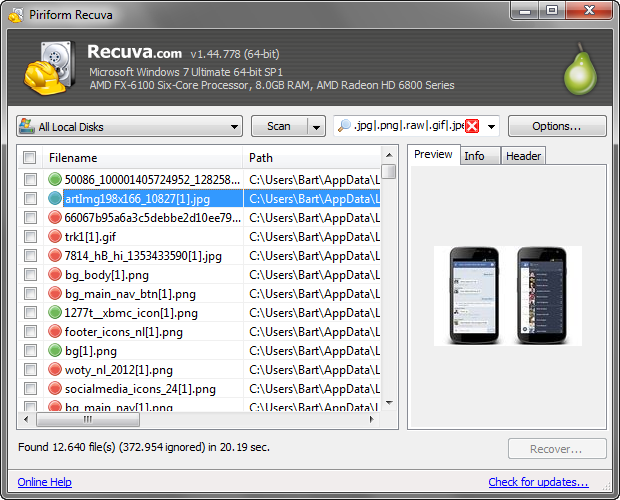