With the free test software H2testw from Harald Bögeholz, storage media such as hard drives or flash drives can be checked for errors and deleted data safely overwritten . The software finds out whether a storage medium actually offers as much storage space as specified by the manufacturer. The information is not always correct due to errors or fraud, so a USB stick check is advisable.

This kind of fraud is a much bigger problem than in Germany, especially in some English-speaking countries. There the procedure against counterfeit memory sticks is often called “Fight Fake Flash” or “Fight Flash Fraud”.

Why is H2testw necessary?

Some USB sticks claim to have more storage space than is actually installed in the device. So it may be that a USB stick with an alleged 128 GB is sold and the computer also shows this, although in reality only 64 GB are installed. If you only save 64 GB, everything is still fine. However, as soon as more data is copied to the stick, the USB stick begins to overwrite the previously contained files or claims that files have been saved, although this is not the case. Since such a scam usually only becomes apparent when it is too late, you should check a new USB stick or a new memory card with the H2testw software before using it in order to determine the actual memory size.

The way of working

The freeware uses a simple principle to check the integrity and the actually available storage space of a medium and can be operated via a graphical user interface.

H2testw generates random data, writes it to files and saves it on the memory card or USB stick until the medium reports that it is full. In the next step, the software reads the files from the storage medium again and checks whether they are identical to those that were previously written. With this procedure, several files are written to the storage medium, which are a maximum of around 1 GB in size.

If the USB stick, memory card or other storage medium is smaller than specified, not all previously saved files can be read, which H2Testw notes and lists in red in a detailed report. If a previously saved file is changed after it has been read from the memory stick, this also appears in the report.

With a large memory card or a large USB stick, the check can take a long time. This also depends on the speed at which data can be saved to and read from the device. That is why an examination is advisable if it does not hinder the work. In extreme cases, the storage medium is simply checked overnight.

In theory, it is possible to test data carriers that have already been written using H2Testw. However, it can happen with a fake memory card or a fake USB stick that the files on it are overwritten. In practice, it is not recommended to test only a part of a storage device. It is best to copy the data it contains to another device and then format the storage medium to be checked completely with a partition so that H2testw can check the entire storage space and deliver reliable results.

Differences between the saved and read test files from H2Testw can have different reasons. The tested storage medium may be defective or manipulated in the event of fraud, so that more storage space is displayed than actual storage was installed.

But the reason is not always the tested storage medium. This can cause problems with other components in the computer. A defective main memory (RAM) also causes problem reports from H2Testw. To rule this out, you can test the main memory with Memtest86 + .

A defective cable or a broken USB socket can also cause the problem. In order to rule out these causes of problems, you should carry out a new test with a different cable on a different USB port if you have a problem. This means that the storage medium is first reformatted so that H2Testw writes, reads and checks new test files again. If you shorten the process and only check the files it contains, H2Testw cannot detect some problems.

H2testw was developed for the Microsoft Windows operating system and supports the old Windows XP in addition to Windows 10. The freeware is only available as a portable version, which is not installed. So just unzip the downloadable ZIP file to start the EXE file it contains. That is why H2Testw also runs on Linux if Wine is used as the runtime environment.

In principle, H2Testw supports all data carriers. In addition to a USB stick or memory card, a hard drive or SSD can also be checked for problems. For memory cards, both SD card, micro SD card and CompactFlash are supported. H2Testw can also handle the types SDHC and SDXC with an SD card or micro SD card. 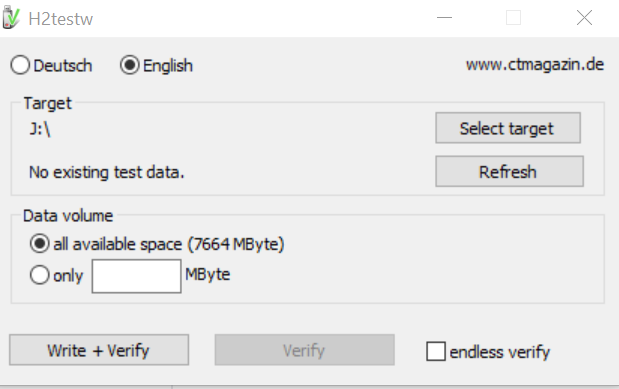 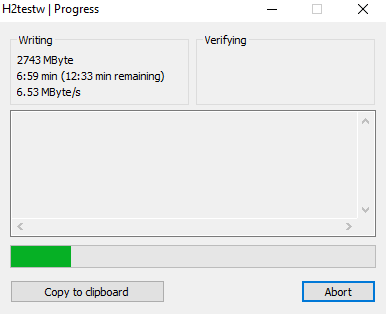 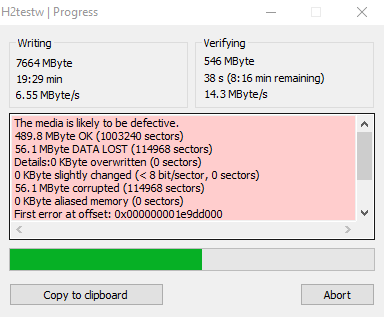