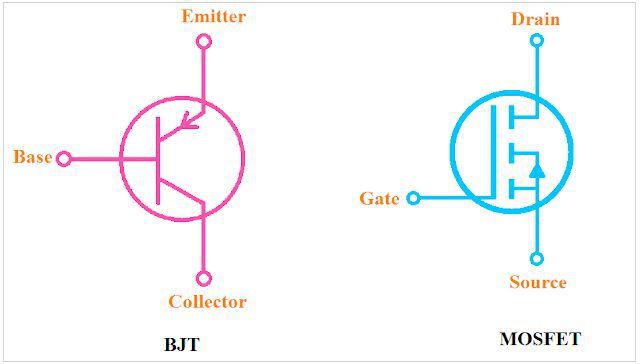 The Metal-Oxide-Semiconductor Field-Effect Transistor (MOSFET) and the Bipolar Junction Transistor (BJT) are two types of transistor that come in various packages, and those unfamiliar with electronics often struggle to decide which should be used in their projects.

While both the MOSFET and BJT are transistors, they work differently and exhibit different behaviours, therefore they are used in different ways.

MOSFET is a kind of field effect transistor (FET) that consists of three terminals – gate, source, and drain. In a MOSFET, the drain is controlled by the voltage of the gate terminal, thus a MOSFET is a voltage-controlled device. The voltage that is applied across the gate controls how much current flows into the drain. 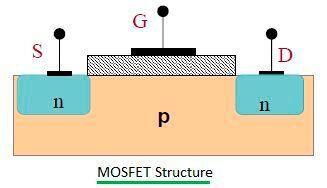 MOSFETs are available in two types, “p-channel” and n-channel”. Both of these types can either be in enhancement or depletion mode (see below). This means that in total, there are four different types of MOSFET.

he BJT is a current-driven device (in contrast, MOSET is voltage-driven) that is widely used as an amplifier, oscillator, or switch, amongst other things. A BJT has three pins – the base, collector, and emitter – and two junctions: a p-junction and n-junction.

Fundamentally, a BJT transistor’s operation is determined by the current at its base terminal. A small base current equals a small collector current, for example. A BJT’s output current is always equal to the input current multiplied by a factor known as a “gain”, typically 10—20 times the base current.

There are many differences between the MOSFET and BJT.

Both MOSFET and BJT have unique characteristics and their own pros and cons. Unfortunately, we cannot say which is “better” because the matter is highly subjective. There is not a straightforward and definitive answer to this question.

When choosing which to use in a project, one must consider many different factors to arrive at a decision. These include power level, drive voltage, efficiency, cost, and switching speed, amongst other things—this is where it really helps to know your project!

Generally, A MOSFET is usually more efficient in power supplies. In a battery-powered device where the load is variable and power supply is limited, for example, using a BJT would be a bad idea. However, if a BJT is used to power something that has a predictable current draw (LEDs, for example) then this would be fine because the base-emitter current can be set to a fraction of the LED current for higher efficiency.