The JST SH 2 pin connector is a specialist connector. It’s not commonly used to connect power to receivers, but is often the connector of choice for other peripherals such as FPV units and batteries for cameras. The JST-SH is also commonly used on Flight Controllers but in higher pin counts such as 4 and 8 pin.This connector’s main distinguishing feature is the wide lugs at the back of the connector which differentiate it from the similar Molex power leads. 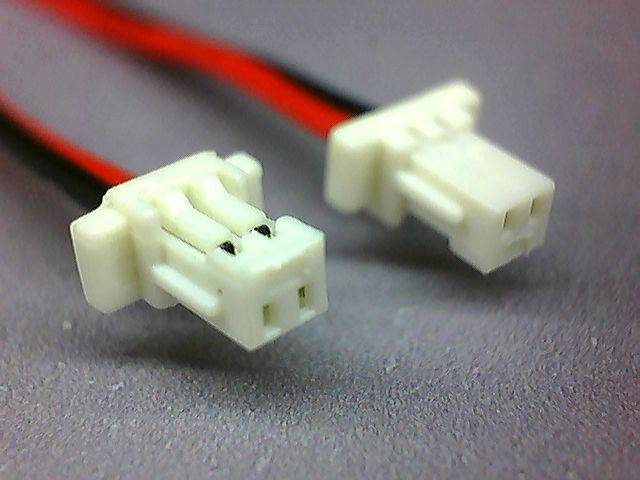 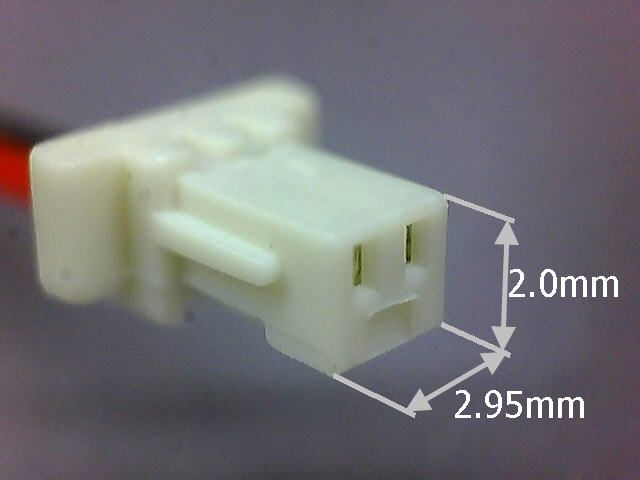 The Molex 1.25mm 2P battery connector is possibly the most common type of battery connector used in RC products. It has, over time become the connector of choice for RC manufacturers of receiver boards as well as batteries. It was originally introduced by E-flight for use in their BNF Ultra Micros such as the Vapor and PT17. As shown in the image at the bottom of the page, this connector is used in the popular NanoTech brand of batteries and embedded in the battery case. The receptor is available as both surface mount and inline types which have leads attached. This connector is often confused with the MCPX (PH2.0) connector, however the distinguishing feature of this Molex connector is its blade shaped pins and locating lugs which slide into slots in the sides of the receptor. 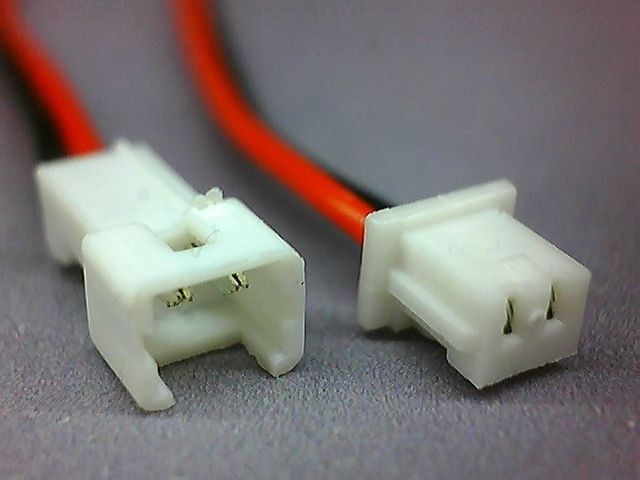 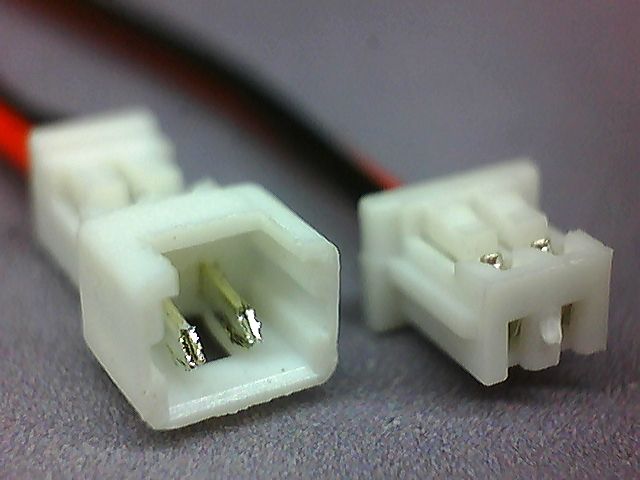 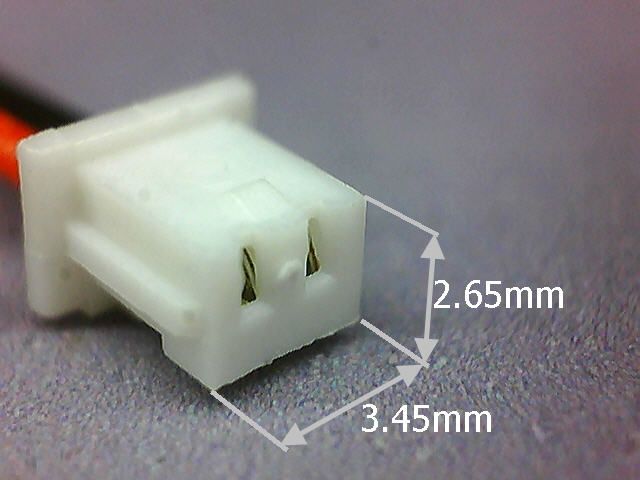 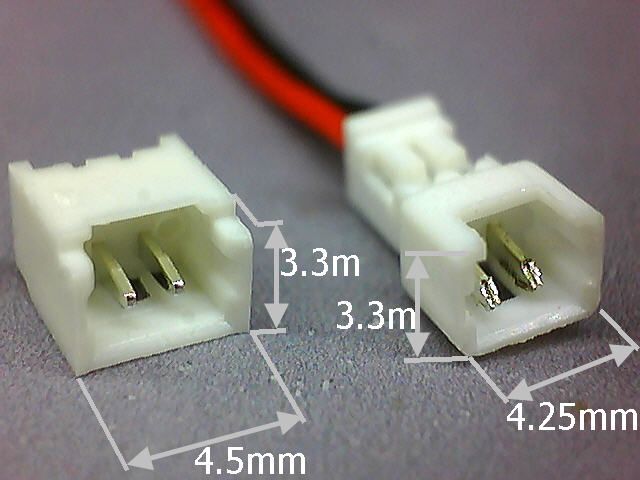 The Molex 2.0mm 2P Connector has become a popular battery connector for many RC toy manufacturers because of its easy operation (plug and unplug) and plainly visible connection orientation. It’s technical specification is “Molex 51005/6-0200”, Please be aware that different manufacturers may wire this connector in opposite ways, so be sure to check the actual polarity your system requires instead of just trusting the wire colour. This connector is commonly used by manufacturers and products such as Losi, Skytec, Walkera (Ladybird), Hubsan , Mini CP and Genius CP. It’s a slightly larger battery connector than other micro RC connectors and its leads are commonly thicker as well. This connector is easily distinguishable by its spade type connector pins. 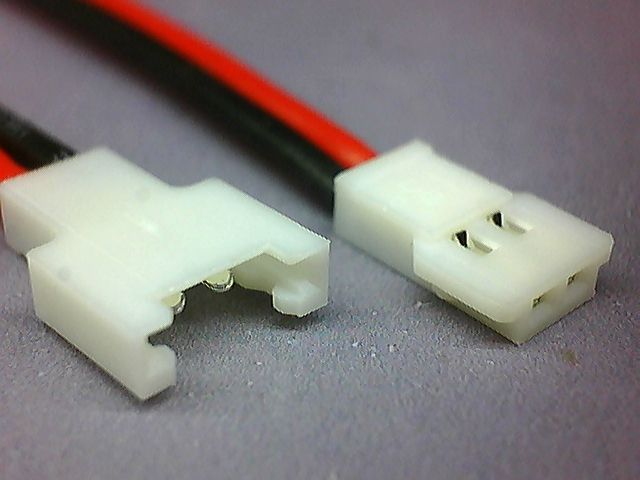 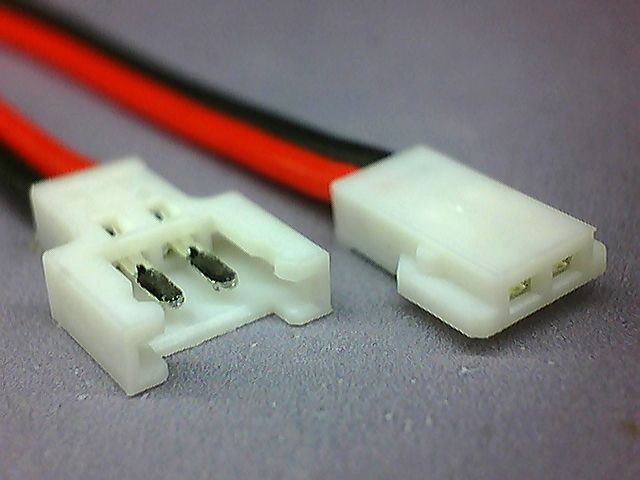 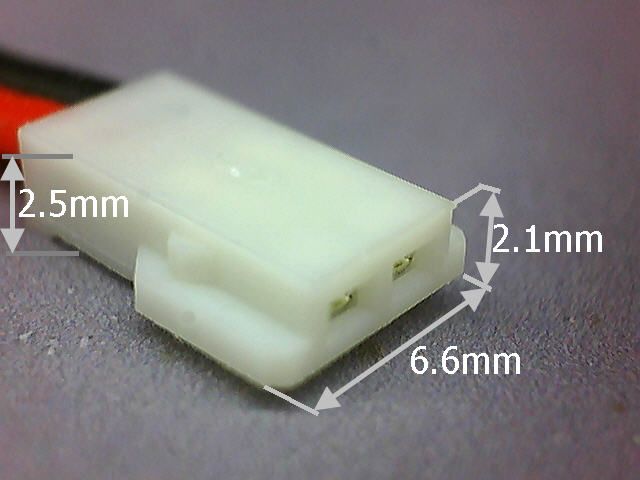 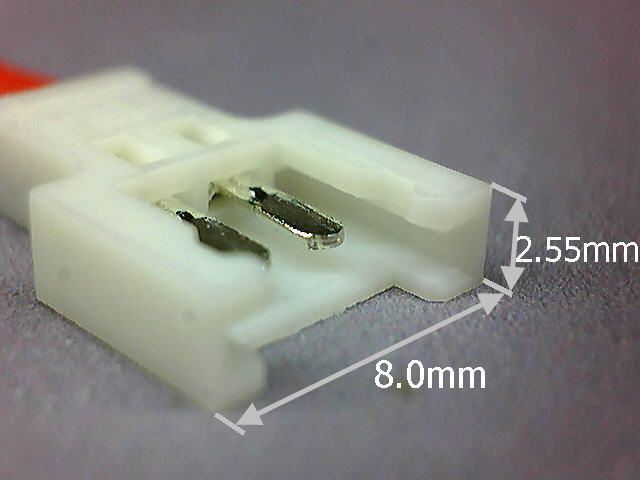 The Molex 2.0mm 3P Connector is a popular brushless motor connector because of its easy operation (plug and unplug). It’s technical specification is “Molex 51005”, Some manufacturers may wire this connector in with black, read and a coloured wire, however for connecting three phase brushless motors there is no correct polarity requirement. This connector is easily distinguishable by its spade type connector pins. 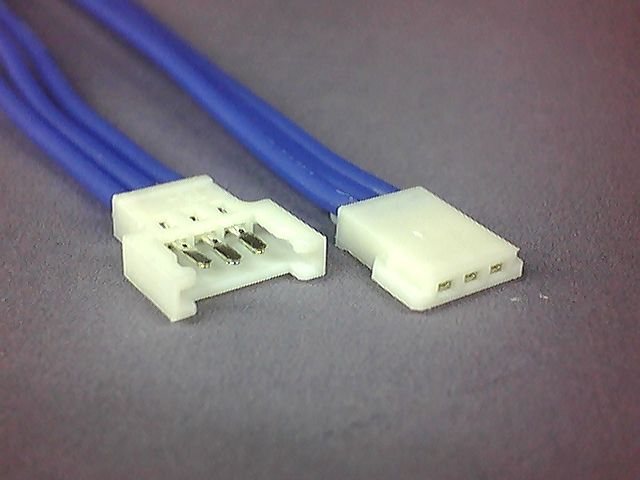 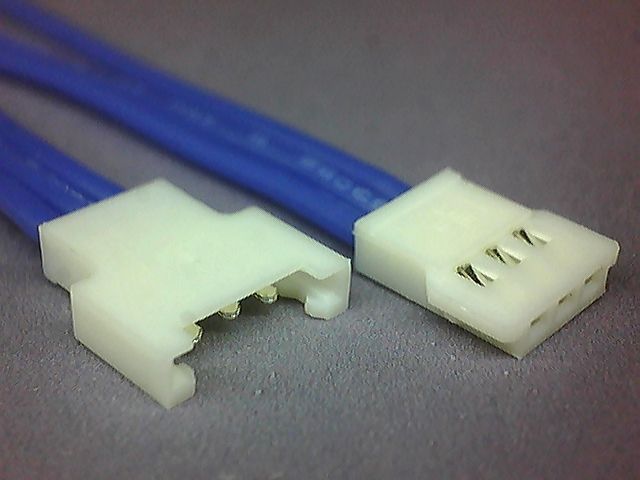 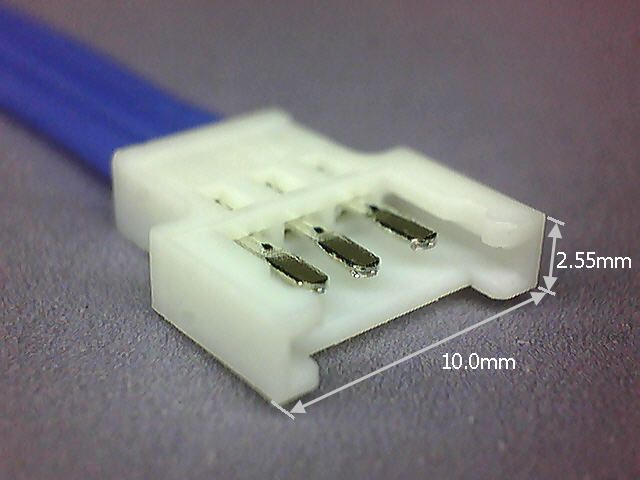 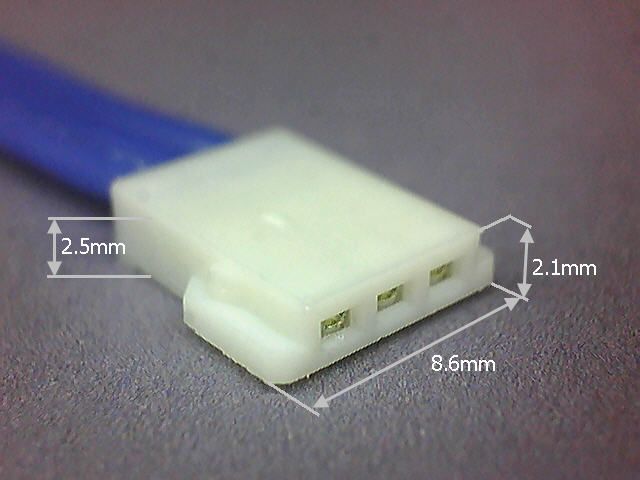 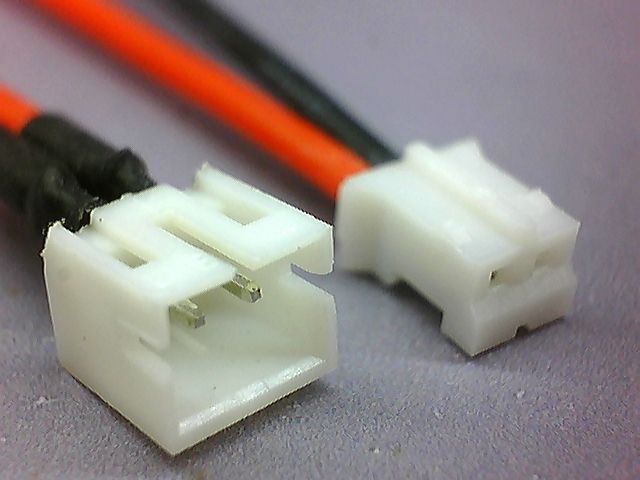 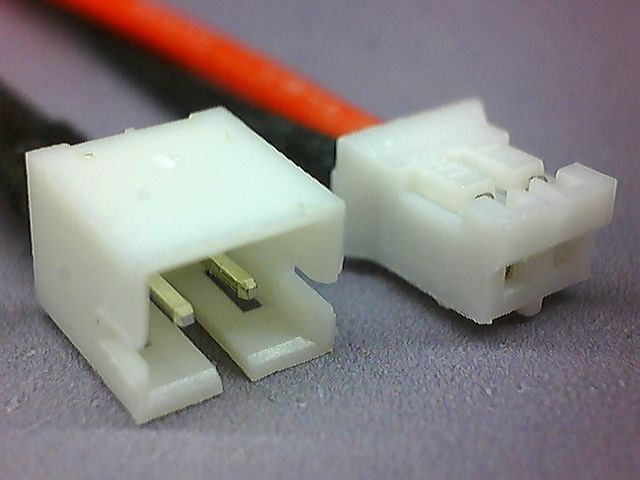 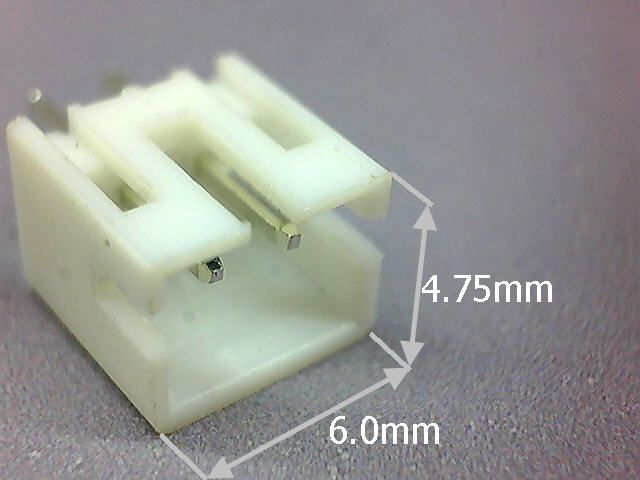 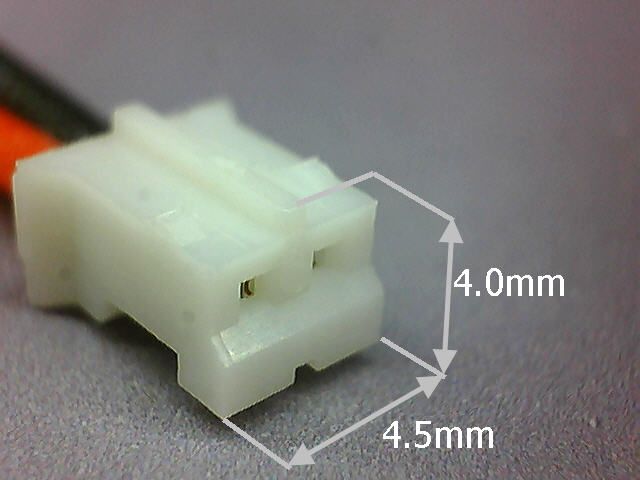 The JST SH 3 pin connector most commonly comes in two wiring types – Brown, Red, Orange which is the format extensively used by HobbyKing products as well as many Chinese based brands. For example, this connector and wiring configuration is used in the HobbyKing SuperMicro series as well as on micro Lemon Rx DSM2 Compatible receivers and DelTang receivers. However, another common wiring configuration is Black, Red, White and this is most commonly used on servos.

In general, almost all linear servos will have this connector type, as will the receivers designed for such servos like the Spektrum AR6400 series. The main distinguishing feature of this connector is the extra wide lugs at the back of the housing which make it easily identifiable compared to the similar looking Molex Picoblade connector. 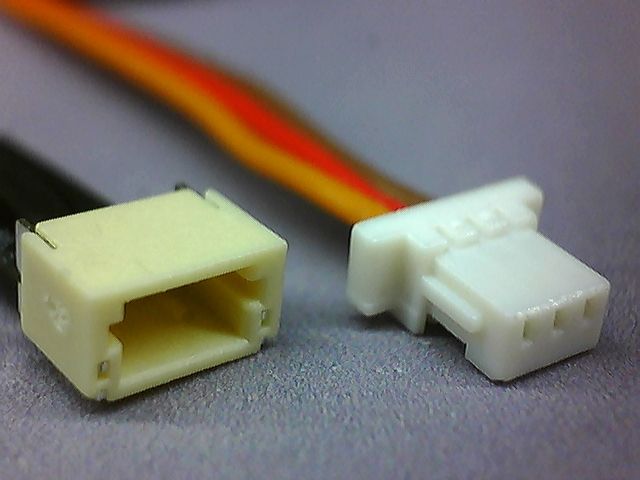 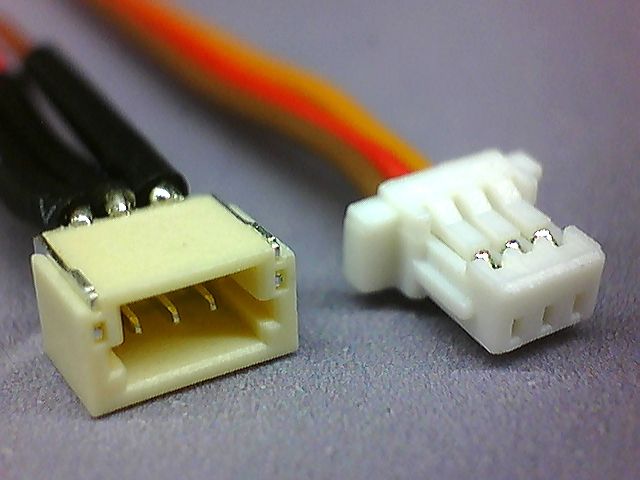 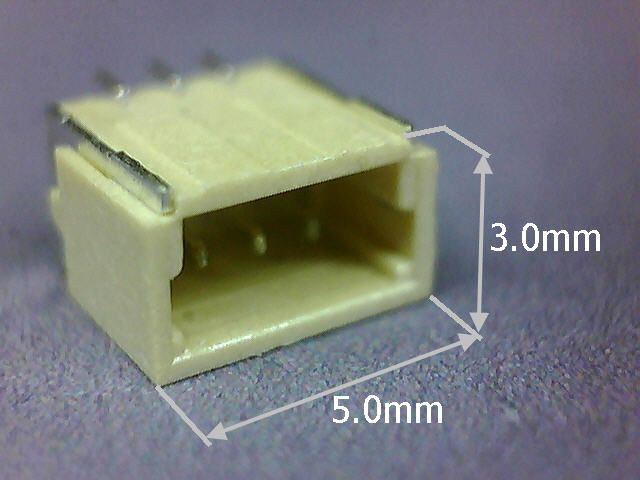 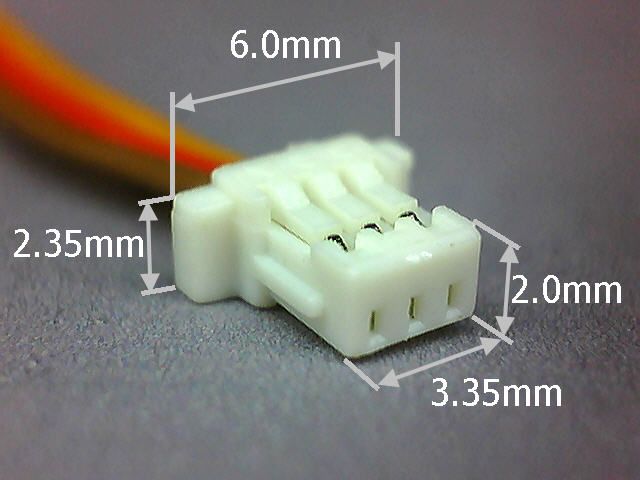 The JST ZH connector is the largest of the common micro connectors with a pin spacing of 1.5mm. It is also the only connector to have round (pole) pins, a feature which makes it easily recognisable and distinguishes it from other similar connectors. This connector is commonly found in use on some Spektrum receivers such as the AR 6300 and also on the DelTang DT Rx35d and LemonRx LM 6Ch ZH. The BlueArrow range of micro servos also widely uses this type of connector. 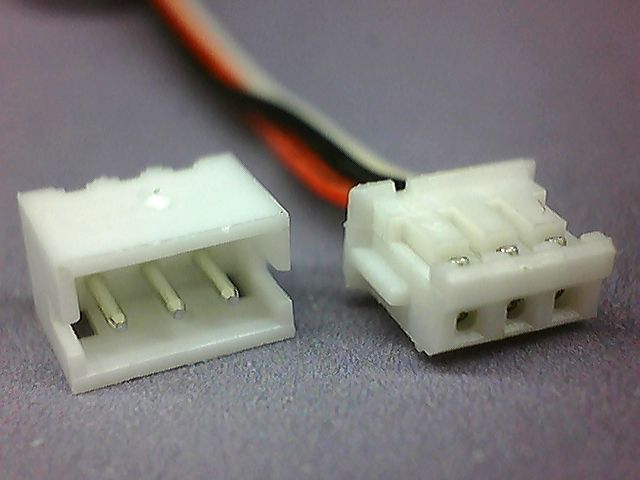 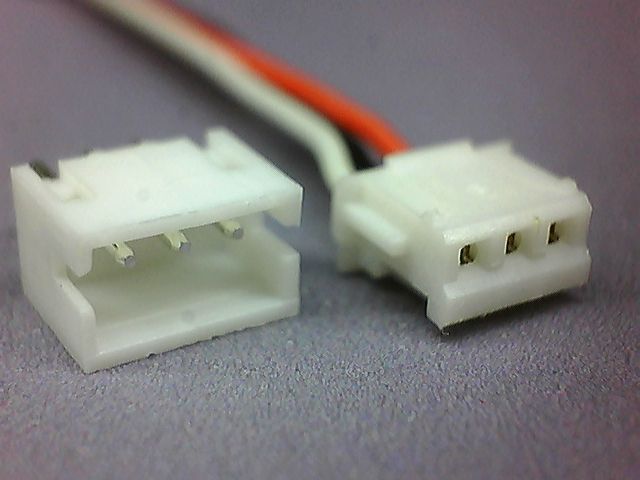 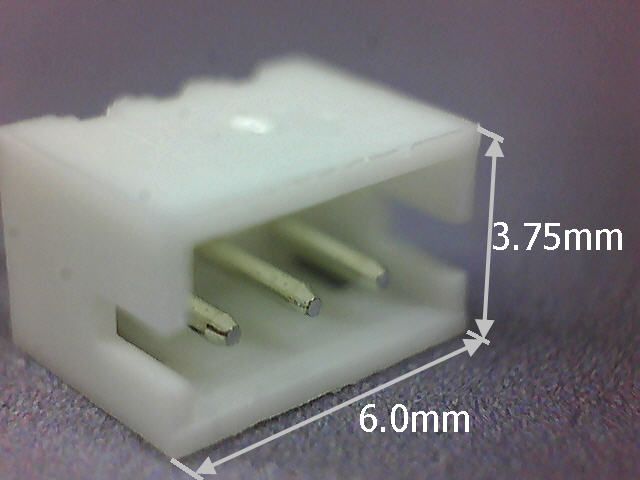 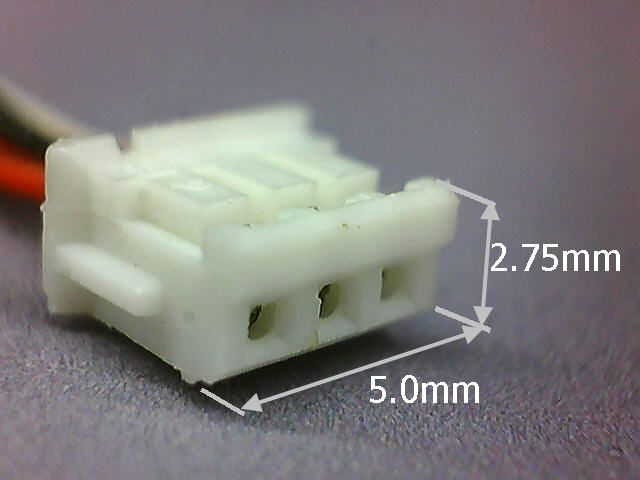 2.5mm pin spacing (same as 0.1inch for all practical purposes)
Not micro size but very common. Used in most balance plugs on LiPos and is the “standard” header spacing in many electronic components including PCs. The standard Futaba/JR style servo plugs are this spacing. 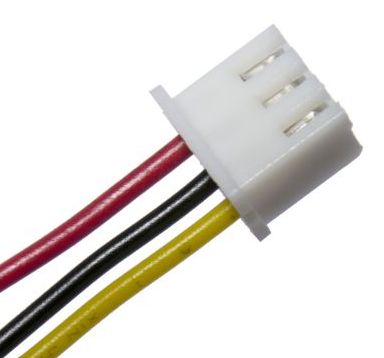 What is a JST Connector?

JST is a standard of electrical connection used widely across a spectrum of electrical applications. It’s defined as a Japanese Solderless Terminal and is manufactured by a company of the same name. The JST range includes a variety of families of connectors with varying pin to pin distances (known as pitches). The JST system was primarily designed to bridge an electrical connection or carry an electrical signal, and due to this, it is not advised to be using them for any mechanical process where the connector will be under any stresses or forces! We see them attached to batteries, motors, circuit boards and more; anything that is mounted still is fair game for this inexpensive and reliable connection type. The only issue with JST is the confusing naming scheme that often has hobbyists chasing their tails with connectors ending up .05mm too big or small for their needs. We’ve put together this primer on JST connectors so that you’ll understand the conventions associated with these connections. 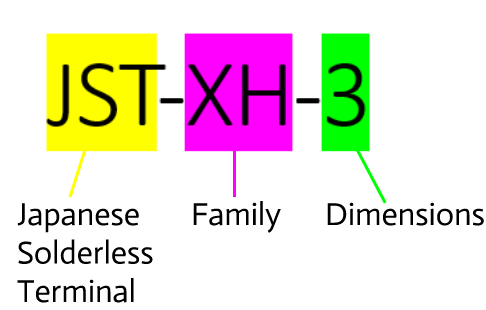 The JST connector titles are confusing; many online vendors have no idea what the standard is based around and easily mess up the ten different families. Each family has a dozen sub-categories to its name too. We want to clear the air on this naming scheme, the JST part just refers to the solderless connection type, all of the connectors share the same type of connection. The following suffix (-XH, -SH, etc.) refers to the shape/style of the connector; these families share the Pin-to-Pin Pitch but not the shape and size of the housing. To define that size, the number/letter combination past the family specification will refer to the size of the unit. If you are looking for a particular replacement part for your project, it will be pertinent for you to know the full specification you’ll need. It’s worth noting that each family of connectors has its own current/voltage/wire size ratings. Beware of the imperial/metric conversions too, for example, a common issue is that 2.5mm connectors not being the same as 2.54mm (.1 inch) connectors despite their often misleading titles. 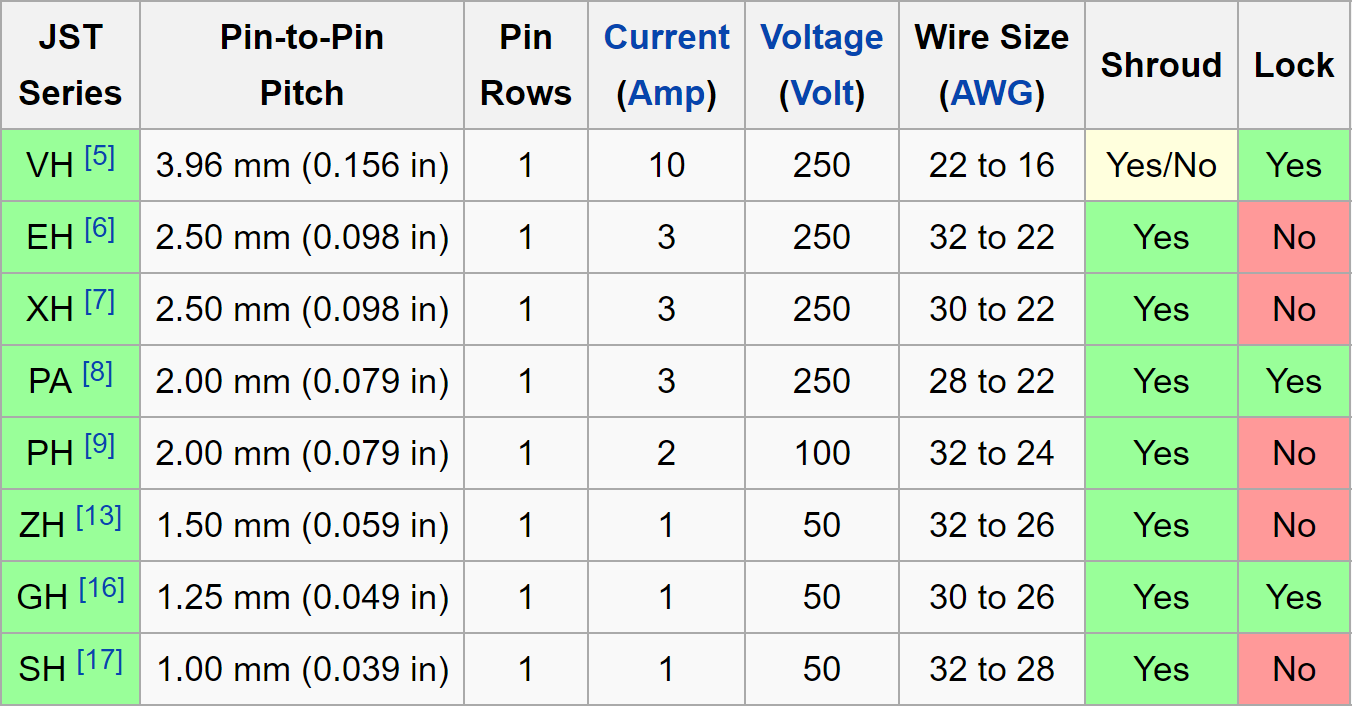 There are a few guidelines that are suggested by the manufacturers when working with JST connectors; these are put in place to ensure you aren’t breaking your connector or using it in an incorrect way: