ImageUSB is a free utility which lets you write an image concurrently to multiple USB Flash Drives. Capable of creating exact bit-level copies of USB Flash Drive (UFDs), ImageUSB is an extremely effective tool for the mass duplication of UFDs. ImageUSB also supports writing of an ISO file byte by byte directly to an USB drive (*). ImageUSB can also be used to install OSFClone to a USB Drive for use with PassMark OSForensics™.

imageUSB includes functionality to Zero a USB Flash Drive. This will replace the contents of the entire drive with 0s. Or alternatively to just Zero the MBR and/or GPT entries that exists on the drive. In addition, imageUSB has the ability to reformat even hard to format drives and reclaim any disk space that may be lost previously.

(*) CD ISO images use a different file systems compared to USB drives. So the direct imaging of ISO9660, Joliet or UDF file system, from a CD, to a USB drive, might not allow the USB drive to funtion in all operating systems. A reformat can recover the drive however.

Warning: Due to the forensic nature of image duplication by ImageUSB, please ensure that you select UFDs with a storage size similar to the image you wish to duplicate. For example, if a 2GB image is copied to an 8GB USB Flash Drive, the drive will only be able to use two out of the eight gigabytes of storage space. In this scenario, users will need to reformat the UFD in order to access the rest of the storage space. 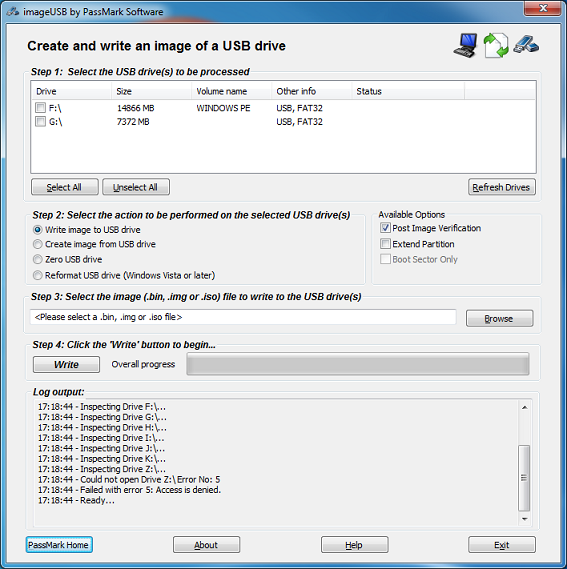