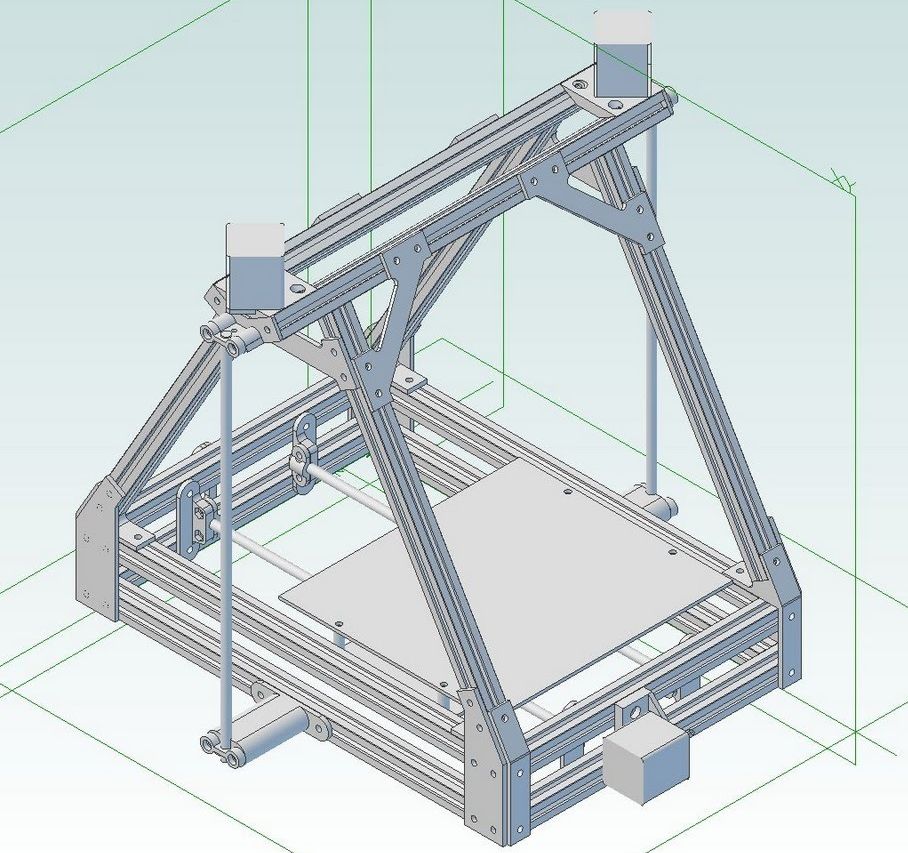 MendelMax (MM) is an Open Source RepRap 3D printer designed by Maxbots in December 2011. It is a true reprap, using printed brackets, but instead of using threaded rod for the structural elements it uses inexpensive aluminum extrusions. This gives a huge increase in rigidity for a minimal extra cost (Self sourcing will cost about $80 more than a standard Prusa when purchased from the recommended suppliers). The required extrusions are available world wide from a variety of suppliers. 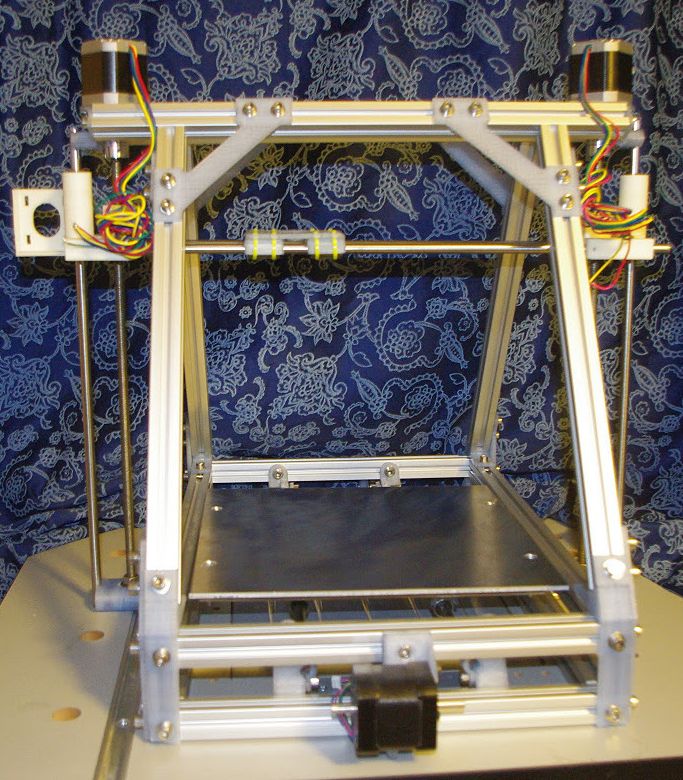 A prototype of the MendelMax RepRap 3d Printer

MendelMax is based on the Prusa Mendel, and keeps its best parts. The Prusa Mendel kept the frame of the Sells Mendel, but fixed the problems in the X,Y and Z axes. MendelMax 1.0 builds on that by largely keeping the current XYZ axes, but completely redesigning the frame.

In addition to the increased rigidity, the printer is much easier to assemble than a standard Prusa. Even an inexperienced builder should have no trouble building the whole frame in an evening, two at most. And along with the easy assembly comes easy hackability. Almost any part on the bot can be removed with just a few screws, so swapping out literally any part on the bot is now a trivial operation.

The X axis is taken stock from the Prusa Mendel, in fact we don’t even specify a specific X axis design, there are several good ones available, including the various vertically-oriented X axis designs that many people are exploring lately. As long as it sticks to the defined standard spacing between the Z rod and the Z leadscrew, it will work fine with MendelMax. We also use the standard Prusa Y design (For version 1.0), though we simplify it just a bit by making it easier to get everything aligned right. Z adds optional thrust bearings to support the weight of the axis (greatly reducing the problems with printed couplers), but this is a purely optional upgrade, and you can easily use the old design if you prefer.

Because MendelMax is primarily defining a new frame design, it is linear-bearing agnostic. I have used both LM8UU’s and PTFE bushings and both work just fine. Brass or even printed bushings could be used, though I recommend avoiding the latter for highest reliability.

The current revision as of July 17 2012 shipping as kits from the official MM store is considered the MM 1.5+. It uses a linear slide for a Y axis rather than polished rods to give the heaviest axis a smoother motion and seems to have cleaned things up greatly. Also different from earlier models the steppers controlling the Z axis have been moved from the top of the printer to the base.

Thingiverse comment:
MendelMax is a new RepRap 3d printer designed by Maxbots. It is a true reprap, using printed brackets, but instead of using threaded rod for the structural elements it uses inexpensive aluminum extrusions. This gives a huge increase in rigidity for a minimal extra cost (Self sourcing will cost about $50 more than a standard Prusa when purchased from the recommended suppliers). The required extrusions are available world wide from a variety of suppliers.

In addition to greatly increased rigidity, this design is faster to assemble (probably 4 hours for most users), easier to print, has a larger build volume (~215x235x190 if built at the standard dimensions), and is easier to hack on.

The X & Y axes are standard Prusa parts, so any design can be used.

Update: The SCAD conversion is mostly complete and available at https://github.com/maxbots/MendelMax To learn how to execute scripts in FreeCAD, read the tutorial at: http://mendelmax.com/tikiwiki/tiki-index.php?page=Getting+Started+with+FreeCAD+scripting Note there may be minor incompatibilities between SCAD generated parts and the parts here on Thingiverse. It should not be an issue intermixing to some extent, but parts that directly connect to another (for example the Y & Z rod mounts & clasps) should always come from the same source. Also note that the SCAD parts are untested at this point so I recommend only using them if you already have a working printer to reprint any parts that may need tweaking.
Update 1/15/2012: Y motor mount & Y Idler mount replaced with much more robust designs. These should fix any flexing issues you might have. The part “Lower Vertex Cupcake” is a replacement for the standard Lower Vertex, but is reduced in height slightly to allow printing on the Cupcake and other small-format printers. Either part will work, but you only need to print one or the other, don’t print both.
Update 2/7/2012: New, improved Lower Vertex pieces uploaded. These parts should be easier to print, easier to assemble, and better looking, though that comes at the expense of being somewhat slower to print. The new parts need to be printed in mirrored pairs, so the the included STLs include one of each part. Print two copies of each of the parts (lower vertex lower and lower vertex upper). You will end up with 8 parts total. If you prefer, you can get the individual STLs for each of the four different parts in the individual lower vertex zip file. One important not about these new parts: WHile they are just as rigid as the old parts, they are not as storng as the old ones. They are amply strong to use the MendelMax as a printer, but DO NOT STAND ON IT! The original parts are still here if you prefer them.