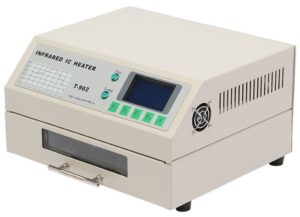 The standard T-962 firmware is very simple and there are a few flaws in it (temperature overshoot, no coldjuntion compensation, no pwm controlled fan, etc). There is a opensource firmware build on github:

As we had use for a small reflow oven for a small prototype run we settled for the T-962 even after having seen the negative reviews of it as there were plenty of suggestions all across the Internet on how it could be improved including replacing the existing controller and display(!). After having had a closer look at the hardware (replacing the masking tape inside with Kapton tape first) it was obvious that there was a simple way to improve the software disaster that is the T-962.

Here are a few improvements made to the cheap T-962 reflow oven utilizing the existing controller hardware with only a small, cheap, but very necessary modification. As you have to open the top part of the oven anyway to reflash the software this is a no-brainer fix:

The existing controller makes the assumption that the cold-junction is at 20 degrees Celsius at all times which made keeping a constant temperature “a bit” challenging as the terminal block sits on_top_of_an_oven with two TRIACs nearby. We can fix this by adding a temperature sensor to the connector block where the thermocouples are connected to the controller board. It turns out that both an analog input and at least one generic GPIO pin is available on unpopulated pads on the board. GPIO0.7 in particular was very convenient for 1-wire operation as there was an adjacent pad with 3.3V so a 4k7 pull-up resistor could be placed there, then a jumper wire is run from GPIO0.7 pad to the Dq pin of a cheap DS18B20 1-wire temperature sensor that gets epoxied to the terminal block, soldering both Vcc and ground pins to the ground plane conveniently located right next to it. Some hot-glue may have to be removed to actually get to the side of the connector and the ground plane, someone seems to have been really trigger-happy with the glue gun!

The system fan is very noisy an can be turned of most of the time. The custom firmware uses spare ADO test point to control it.

The firmware was originally built with LPCXpresso 7.5.0 as I’ve never dealt with the LPC2000-series NXP microcontrollers before so I just wanted something that wouldn’t require TOO much of work to actually produce a flashable image. Philips LPC2000 Flash Utility v2.2.3 was used to flash the controller through the ISP header present on the board.

LPCXpresso requires activation but is free for everything but large code sizes (the limit is larger than the 128kB flash size on this controller anyway so it’s not really an issue). The flash utility unfortunately only runs on Windows but Flash Magic is an alternative (see Wiki for more flashing instructions).

The MCU in this particular oven is an LPC2134/01 with 128kB flash/16kB RAM, stated to be capable of running at up to 60MHz. Unfortunately the PLL in this chip is not that clever so with the supplied XTAL at 11.0592MHz we can only reach 55.296MHz (5x multiplier). Other variants exist, the Wiki has more information about this.

Ps. FTDI is preferred, because you need acces to DTR and RTS

Note: please make sure you have the 3.3V selected on the USB stick (via a jumper), 5V may harm the device!

To read/write to the unit, please power the unit ON

First of all, make a backup of your existing firmware, so you can always revert to it if something went wrong. 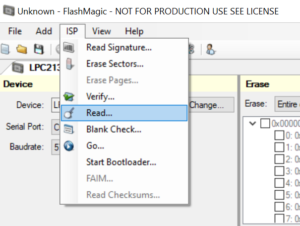 In the next screen go to TAB “Export Memory” and fill in the filename: 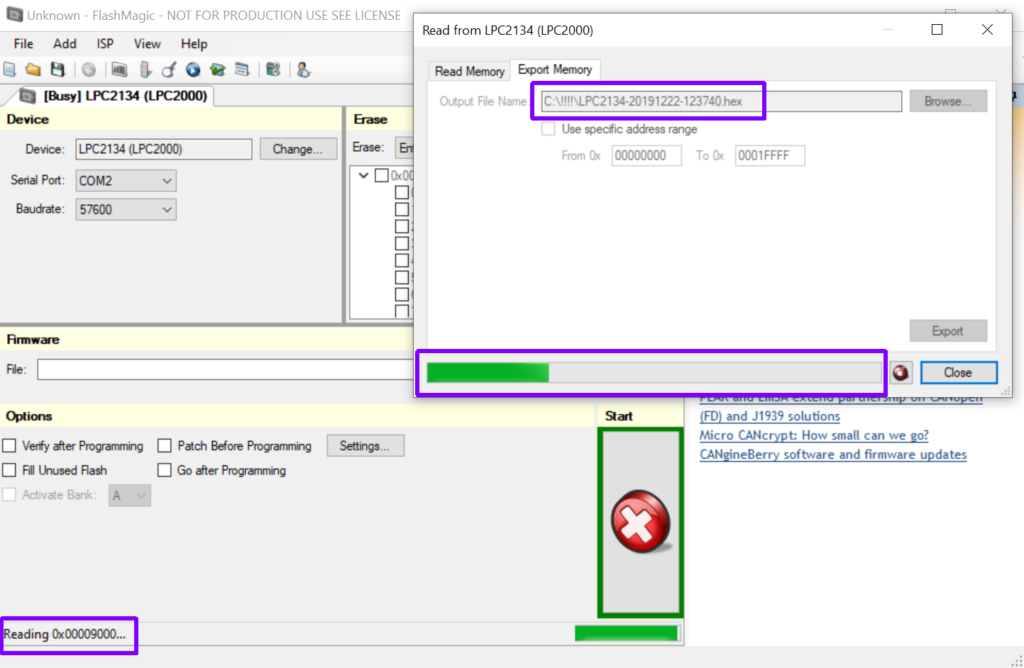 You can use flashmagic to upload the firmware: 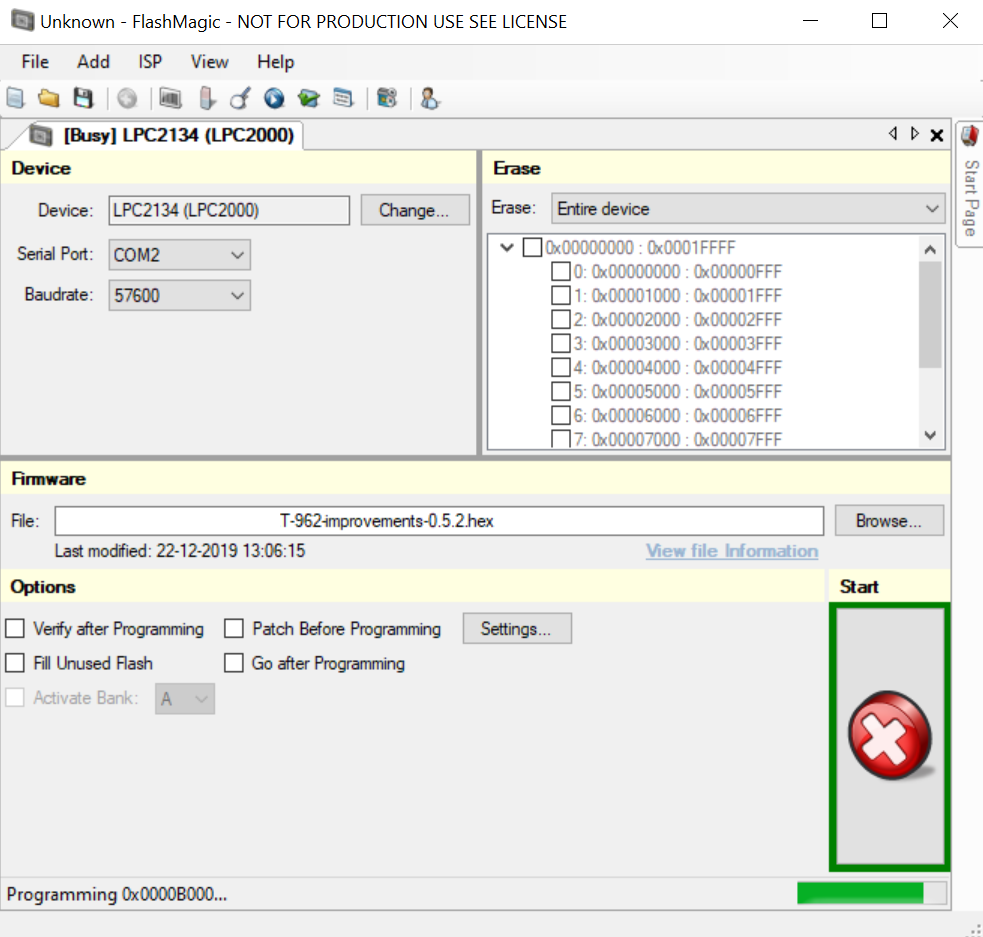 or the Philips LPC2000 flash utlity: 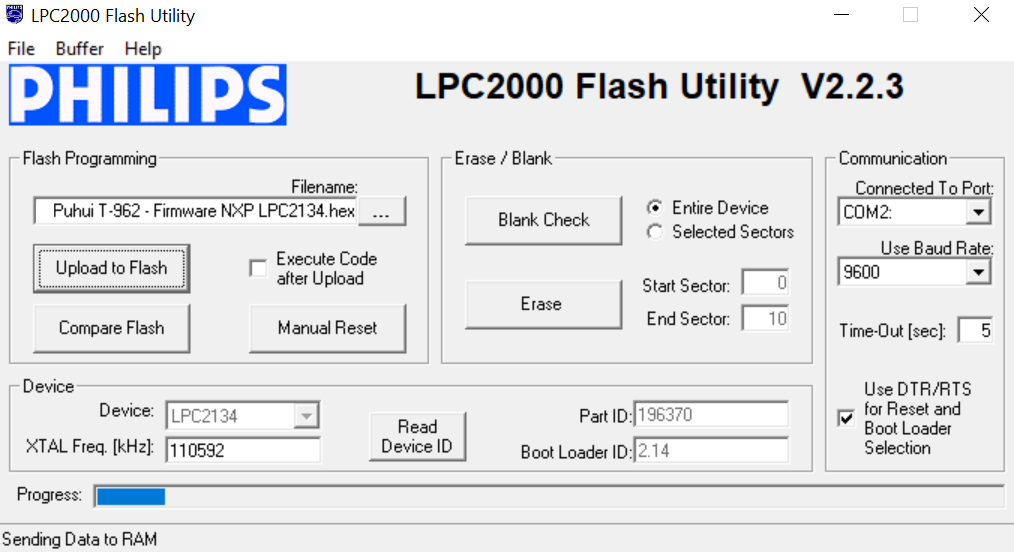